Golf has gotten more expensive than ever. Between land-use, water irrigation, and groundskeeping costs, golf courses have no choice but to raise their greens fees. Climate change has played a role as well. But there’s also golf equipment with the latest technologies and eye-popping price tags that are likely to send a lot of golfers to the secondhand store. This is all part of the reason why Red Bird Golf Links is interested in expanding the definition of and access to a round of golf. So, we thought we’d put together our best list of modern hacks for playing golf for less money and less time.

How to Keep Playing Golf When Money and Time are Short

Most golfers and even a lot casual observers are familiar with the two most common types of competitive golf—aka ways of keeping score with your friends and opponents. Stroke play is when you simply add up all the actual strokes and penalty strokes over a certain number of holes (typically 9 or 18 holes). It matter whether you lose a hole by 1 stroke or by 4 strokes. In contrast, with Match play each hole counts as one discrete win, loss, or draw. You can’t lose more than one hole at a time…unless you’re playing a variation of match play like Skins in which the hole carries over to the next hole until a player wins a hole and collects the value of all the holes that have accrued since the last time a player won a hole.

But this is just the beginning. Whether you’re looking for new ways to play with your friends or you’re trying to buff up on your golf trivia, here’s a collection of common and not so common variations of the traditional stroke and match play golf. 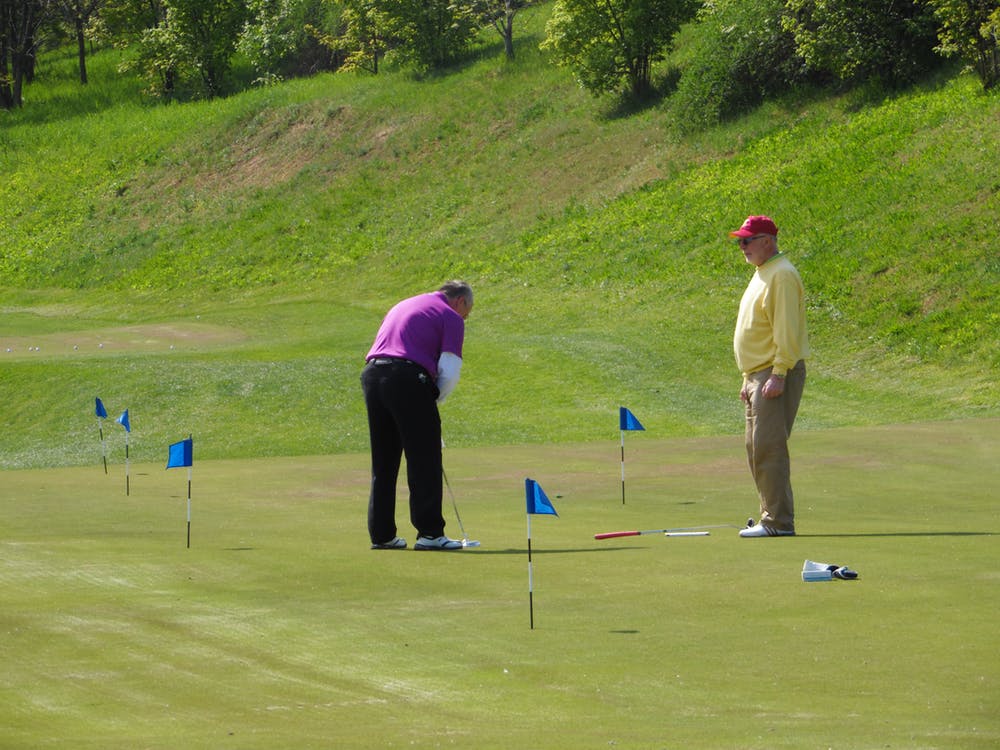 A foursome is played between two players in partnership, playing one ball which they stroke alternately. One player tees off on the odd numbered holes, the other on the even holes, regardless of who played last on the previous hole. The other shots are played in turns until the hole is finished. Penalty shots do not affect the order of play. Foursomes can be played under match play or stroke play rules. There are countless variations of foursomes.

Also known as Bag Raid, this is a great way to make golf new and interesting again. Also a great way to develop your shot-making skills. Using match play, when a golfer or team wins a hole, they “remove” a club from the opponent or opponents’ bags, typically starting with the putter, then the driver. That This continues until the match is decided. Some people allow a team to reclaim a club if someone on their team makes a net birdie.

The same as foursomes but each player plays with his own ball and the better score of the team counts. Four Balls can be played as match play or stroke play. In a three-ball match, three players play against one another, with each playing two discrete matches.

With closeout, the 18-hole match is worth a set amount and once it’s decided, a second match on the remaining holes begins for half the original amount. So if the initial wager is $20 and the match play is closed out after 15 holes, the last three holes are played under match play for $10, and if one player wins 16 and 17, the 18th hole would be played for $5. Great for making sure every hole counts.

This is the golf game for you if you frequently play with two other friends. There are a total of nine points available on each hole (a point has a predetermined dollar amount). The player with the low score on a hole gets five points. The player with the second-lowest score gets three. And the worst score on a hole gets one. If there are ties, you simply divide the points by the number of players tied. Relatively easy to keep score among three players that’s different than standard stroke play.

Type of match play in which each hole is worth a given amount of points or money. You can win only by winning the hole outright, which is done by carding a lower number of strokes on a hole than all other players. If the best score for the hole is achieved by more than one player, the money or points are carried over to the next hole. An entire match may be won by winning a single, well-timed hole. In the event that two or more golfers halve the final hole, a playoff begins until one golfer wins a hole outright.

Instead of rewarding great shots, players are penalized with points for bad shots. Such as Hitting a ball in a bunker (1); Hitting into the water (2). Hitting out-of-bounds (3). Three-putting (1). Four-putting (4). Duffing a tee shot (1). Points can also be subtracted for stellar play such as making birdies, holing long putts or stiffing shots from off the green. Feel free to modify the categories and points. The player with the lowest point total wins. Great for developing course management skills.

Think of this as the pass/fail version of golf. Rather than using match play against at an opponent, players need only score a bogey or par to get a result and score a point for the hole. The winner is the player who is most successful in the aggregate of holes.

Great for players who fear or struggle with one or two holes, a player can use his or her handicap strokes on any hole until they run out. The catch is that the handicap stroke (or two) has to be declared before the tee shot on that hole, and a maximum of two strokes can be used on any one hole. The player with the low-net score wins the pot. Can be used for stroke or match play with varying results.

Great for not ruining the fun when an inconsistent player is prone to blowing up on a couple holes. At the end of the round, each player gets to throw out his or her worst score on three holes. The best 15-hole score wins the pot. This is a great game for mid-to-high handicappers because it tends to keep everyone competitive and interested for longer. Some people prefer to not even add up the score until afterward.

Each player in a team (typically of two to four players) tees off on each hole and the team decides which shot was best. Other players pick up their ball and play their next shot from that position. This process is repeated until the hole is finished. The lifted balls must be placed within some distance, often 6-12”, of the original player’s position. This is a popular type of competition for events and organizations, especially those that involve players of varying skill sets. Here is one example of official Golf Scramble Rules.

Texas Scramble: This variation requires a set number of drives from each team member must be used during the course of the round.

Reverse Scramble/Bloodsome: This scramble is one in which the team plays its worst ball after each stroke. Better for small teams of skilled golfers. Otherwise, it can take forever.

Shamble/Bramble: Pick the best ball off the tee, everyone plays regular golf from there into the hole.

Ambrose Scramble: An adjusted team handicap is used to level the playing field across teams of varying skill level.

Florida Scramble: After each stroke, the golfer whose ball was selected sits out the following stroke. Also called a Drop Out Scramble, Stand Aside or Stand Out.

Miami Scramble: The golfer whose drive is selected sits out until the team reaches the green.

Powerball Scramble: On some holes, team selects one of its golfers to tee off from the forward tees.

Each player gets a SCrambleslength of string that they can use to improve bad lies. The length of the string depends on the player’s handicap (generally 50cm per handicap point). When in a bad lie the player cuts off the length of string equal to the distance they move the ball(without penalty) to any new position away from where the ball had previously come to rest. Once the ball is moved, that length of string is no longer available. Each player may use his string at any time during the round to save as many strokes as possible.

Great for a side pot game that will force you to become better at short and clutch putting. There are no gimmies in Snake. Any three-putt or worse, you have to add to the pot. The last person to three-putt has to pay the other players the amount in the pot. You may want to keep this side pot add-in small, especially if you’re playing one a more aggressive variation in which the amount you add to the pot doubles each time. Another version makes the person with the most three-putts pay.

Welcome to Red Bird Golf Links! We’re just starting this website. We’ve always loved all things golf, but not in the grinding on-the-range and on-the-practice-green from dawn-‘til-dusk sort of way. That’s part of what intrigued us about this domain. It used to be the site for Sapphire Valley’s 9-hole course until they brought their golf course information under the site for their main resort in Sapphire—on the North Carolina side of the Smoky Mountains. We noticed that this resort also hosts Foot Golf—one of the few variations of traditional golf that we’ve not yet had the pleasure to try out. So, until we figure out how to best design this site, learn about enjoy all the different variations of golf that are out there: